FREE Mainland UK Delivery on ALL Orders over £100 + VAT!
429 Too Many Requests

nginx
UK
The store will not work correctly in the case when cookies are disabled. 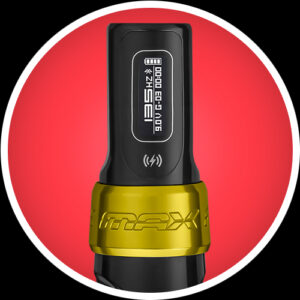 Product of the week & New Products

The FK Irons Flux Max is a wireless pen-style tattoo machine with a host of helpful features, supported by the improved PowerBolt II.

The culmination of years of work, the expertly crafted Flux Max is made in the USA with the goal of offering a refined user experience for all tattoo artists.

By using the PowerBolt II you can utilise the Darklab Killswitch, a hands-free foot pedal with built-in anti-slip mount and long-lasting internal battery. Unlike in previous models, you don’t even need to connect to the Darklab app, as it is connected natively to the PowerBolt II via Bluetooth.

The PowerBolt II has a display screen showing everything you could need to know – a main power display in hertz or volts, a secondary power display with the alternative option, Bluetooth indicator, battery charge indicator, eGive level, and a timer. There’s even an option to change the right- or left-handedness of the screen orientation.

A touch pad on the side of the battery pack offers the opportunity to turn it on and off, as well as increase or decrease the voltage in increments of either 0.1 or 0.5 V. This setting and others can be changed by accessing the battery menu with a three-second hold of the power button, and then continuing to use the power button to cycle through options.

The battery also features a shipping mode, making it perfect for travel to guest spots and conventions. Once the battery is fully in shipping mode, it can only be turned on again by plugging it into mains power with its USB-C cable. We’d always recommend using the cables and chargers that come in the box to ensure that you’re receiving a solid flow of power.

Featuring additional layers of electronic safety protection in the new and improved motherboard, the Powerbolt II has a few additional tricks up its sleeve.

Sensors in the Flux Max automatically check the tension of the cartridge, so that the give you want is exactly what you get. You can easily set the eGive via the PowerBolt II; just choose from level 0 for no give, level 1 for hard, level 2 for medium, and level 3 for soft.

Whereas the previous PowerBolt only offered voltage as low as 5 V, the PowerBolt II is able to be turned down to 4 V, which makes the Flux Max perfect for styles such as stippling.

In terms of the shape, the FK Irons Flux Max has been designed for comfort when holding for long periods of time. The new style of grip has curved indentations around the base for better ergonomics, although you can also choose to use disposable grips, or the Flux and EXO grips if you prefer.

Compatible with universal Cheyenne-type needle cartridges – including our own Killer Ink cartridges – as well as previous PowerBolt battery packs and the Darklab app, adapting to this machine will be easy for any artist already comfortable with a pen-style rotary machine.

In addition, the Flux Max comes with a 4.5 mm stroke as standard, but will also be available in 3.2 and 4.0 mm options.

Choose from two colour options for the Flux Max – one fully black (known as Stealth), the other featuring a golden ring around the centre. The grip of the machine itself is similar to the FK Irons Gorilla grip, but with a more tapered design.

Watch our product video below for a full run down of the FK Irons Flux Max and PowerBolt II!